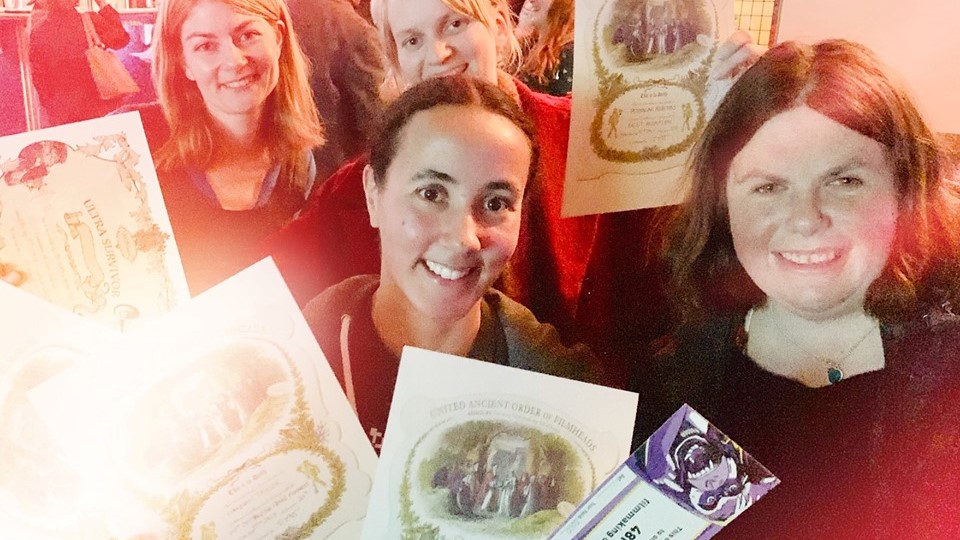 Hannah Taylor’s latest film DopeMonkey Live is up for a number of awards at the 2019 48HOURS Grand Final. Brittany Baker had a chat with her about the inspiration behind her menstrual musical and her passion for film.

You are one of the Taranaki teams to be nominated in the National 48HOURS Awards – congratulations! Of the five categories you’ve been nominated, one of them is Best Solo/Duo Award. Tell us a bit about your experience working on your own in this competition.
Well, I’ve done 48 hours three times as a duo before with my partner Josh, but this was the first time I did it fully solo. In the duo we’d both write, but I did all the technical roles like storyboarding, filming, sound, directing, editing etc. And Josh would be the main actor.

In bigger teams, often your writers/actors/camera folks/editor are different people so there’s at least one point in the weekend where each person isn’t under full pressure. So I think that experience helped a lot for a “solo” year, as I am used to being 110 per cent in for the whole 48 hours.

The main difference for me this year was the brainstorming/writing stage. That part is really different with only yourself to bounce ideas off, and to try to figure out if what you’re doing makes sense.

Another one of your nominations is for Best Original Score/Song. We’ve seen your film and have had this hilarious tune stuck in our heads. What inspired this creation?
Well, one of the things I love most about 48HOURS is you go in with all kinds of ideas, but every time you come out the other end with something you had no concept of on Friday, and had no idea you were going to create. This song was much the same.

After getting all the required elements and my genre of “gross-out comedy”, I brainstormed everything gross I could think of. I decided there would probably be a lot of poop and fart jokes in other people’s films and thought, “What else is awkward and gross?” And ended up at puberty, then periods.

The song itself was the product of crazy 2AM alpha brainwaves to come up with a few sets of rhyming lyrics, and then a fair amount of elbow grease to get it polished up and the music written.

I’ve had so many people comment that the song got stuck in their head long after the film ended, so I’m pretty happy with that as testament that I achieved my goal! Haha!

You’ve also been involved in Tropfest, taking out the top prize in 2016. Where has your passion for film come from?
I’ve always loved watching films. When I was a kid, I used to keep all of my movie ticket stubs and put them in a book with the date, time, who I went with, a rating out of five, and what I thought of the movie. I did that all through high school and up to the first couple of years of university.

When I lived in Auckland, I discovered the NZIFF film festival, and really enjoyed the depth of the examination of the human condition found in those types of films. They were giving voices to people who might not normally be heard, and asking questions that are not normally asked. That helped fuel my passion for wanting to tell stories, especially as social commentary, and especially for those people who aren’t usually heard.

I actually entered Tropfest just to challenge myself to make more than one film in a year, since I usually only end up doing 48HOURS. I was totally taken aback to be shortlisted, and then the shocks just got bigger and bigger, and I still can’t believe I won best film. But I am so grateful to have been able to share my family’s stories, and for all the interesting stuff I learned in LA.

Why do you think film creation is important, even to those with little to no experience?
I think humans have an innate affinity for stories and storytelling. It goes right back to cave paintings and hieroglyphics. Film is a fantastic medium for storytelling as it’s visual, and humans are pretty easily pleased by visual things, too.

I think it’s a really great experience, whether you have any formal training or experience or not, to take an idea, and work it through until it becomes a reality, and to then see people react to it.

It’s a really weird feeling sharing your creations with other people, especially on a big screen. But the best part about having diverse groups of people making films is everyone thinks very differently, so you see ideas you wouldn’t normally see.

Experience helps you to tell better stories more easily, but being a beginner means sometimes you break the rules in ways experienced people wouldn’t. Sometimes it doesn’t work out, but often you see really cool things come out of it. That’s what’s great about the 48HOUR film comp.

If you could make a feature film, what would it be about and who would be your lead actor(s)?
Hmm, that’s a great question! I have all kinds of weird and strange ideas floating around, but I often come back to my parents’ lives. My dad grew up in the Civil Rights Era in Texas and he’s African American. My Tropfest film Back o’ the Bus shared some of his stories, but there are a bunch of others that would make great films – or a Netflix show for that matter.

My mum also grew up in the hippie era here in New Zealand, with the Beatles, and hippie communes, and all of that. She passed away recently, so there are a lot of aspects of her life that I think would make a great film. Or maybe even just some combination of the unlikeliness of the two of them meeting in New Zealand, of all places!

For actors, hmm. Maybe Terry Crews for my dad as an adult and Caleb McLaughlin from Stanger Things for him as a kid. For my mum, probably Millie Bobby Brown as a kid and Winona Ryder as an adult. I may also be a Stranger Things fan…

What are some of your favourite films and why?
Ohhh that’s such a hard question! The film that has probably been the most memorable viewing experience for me was probably Dear Zachary.

It’s a documentary made by a guy about his childhood best friend, but it turns out to be for the friend’s baby son, because his friend was murdered. It takes you on such a roller coaster of emotions, and there are even more twists than all of that, and I laughed and bawled.

That was a moment where I went “Wow, film can be really powerful and hit people right in the feels!” Some other festival ones I love are Hard Candy, Let The Right One In, and The Wave.

Anything else you’d like to add?
I would encourage anybody who is interested at all in trying to make a film to give it a go. And if you’re waiting for “when”, 48HOURS is a great way to make it happen. Join the 48 Hour Film Taranaki page on Facebook. If you don’t know how to edit or anything, or find people to be in a team with, just ask. I’m sure plenty of us would be keen to help to build up our region!