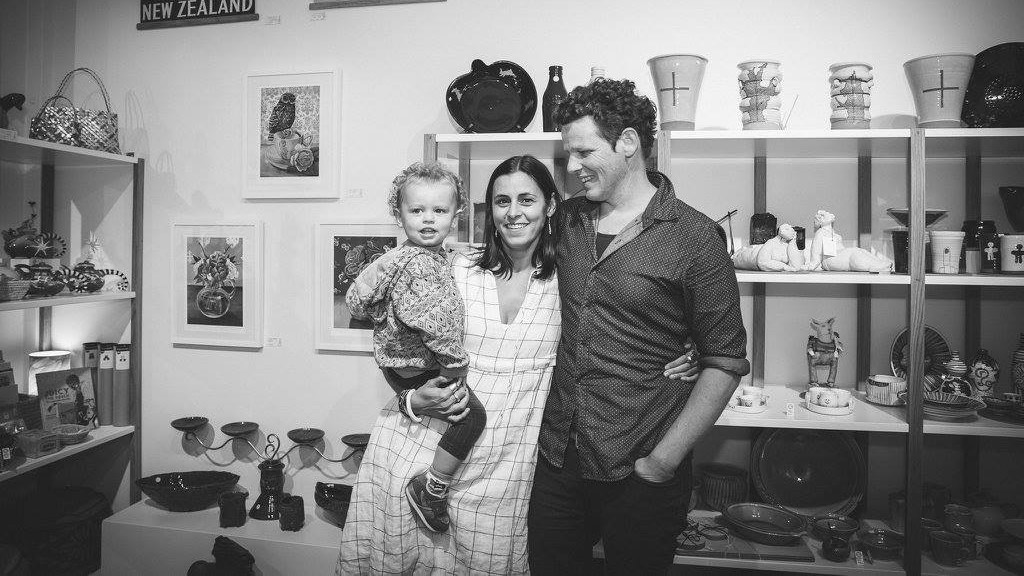 It was the early 2000s and Luella was a uni student, studying via correspondence in Taranaki and working part time in a little shop called Kina. The creative and art-filled space was the newest and funkiest addition to New Plymouth’s CBD, having been opened by Fiona Cameron in April 1999.

At the same time, a potter named Paul Maseyk was bent over a wheel, surrounded by hills of undulating native forest on the outskirts of Coromandel, at Barry Brickell’s legendary Driving Creek Railways and Pottery.

Luella, who was born and raised in Coromandel, would often head home for the weekend, and Fiona would task her with stopping by the Railway to pick up new treasures for Kina.

“So everytime I went up to Coromandel I would always go and pick up pots from Paul,” Luella says.

“I remember picking up work from him for many years, thinking his pots were pretty spesh.”

Over the years Luella stopped by to collect pots whenever she was driving through. However, it wasn’t until after she bought Kina in 2011 that the charm of the artist started to catch her eye.

“And then one day Paul asked, ‘Luella, don’t you have enough of my pots at Kina now?’

“It was at that stage he started inviting me to dinner,” she says, laughing.

The couple now have four-year-old Charlie, and Paul’s work continues to be sold and exhibited on the shelves of the shop that brought them together all those years ago.

For Luella, the now iconic Kina has been a part of her world for nearly two decades. It’s intrinsically linked to many aspects of her life – and that’s not only because a variety of the stock gets snapped up for her home before it even hits the shelves.

She started at a fledgling Kina as a shy young student, eventually becoming an assistant and hungrily learning all she could from both previous owners. After working as the right-hand woman for Kina’s second owner, Rebecca Mooney, Luella bought the business in 2011.

Owning a design and gallery store isn’t quite what she had in mind when she graduated with a degree in resource planning, but when the opportunity to own Kina came up, it seemed like the right choice.

“That’s one thing I always come back too. I really enjoy going to work, I really enjoy it. There’s a lot of people who wake up everyday and don’t want to go to work, but Kina is an enjoyable place to be.

“You feel really privileged to have that.”

This week Luella and her team will be marking Kina’s twentieth birthday with a special exhibition and an evening of celebration – complete with a cake.

The exhibition features work from ten New Zealand artists and includes all the things Kina is known for – like sculpture, glass art, paintings, ceramic work, and jewellery.

Together with the birthday party, Luella says the events typify the essence of what Kina is about – showcasing New Zealand art and objects in an inviting, warm and welcoming space.

That welcoming space has always been the bottom floor of the historic Exchange Chambers Building on Devon St West. The two storied timber building is one of the oldest in central New Plymouth, having been constructed in 1894 for Charles Thomas Mills.

It was designed by Frank Messenger and is thought to be the first commercial building he created after his arrival in town. The building was restored by owners Robyn and Graeme King in 1999 and has been Kina’s home ever since, minus a few months in 2014 when it underwent major earthquake strengthening.

Since becoming the home of Kina, the 125 year old building has housed countless exhibitions, showcased the work of hundreds of artists, and welcomed thousands and thousands of art lovers through its doors.

For Luella, it’s humbling to see how far Kina has come, and how it’s grown into a close-knit and supportive community.

However, there are some things from the early days that she says she will never forget – including an outhouse toilet.

“Kina’s bathroom used to be a strange toilet on the back lawn,” she says.

“You used to have to kick so hard to open the door, it was like a little garden shed with spiders, and no power. I hated it.

“And we used to have to put those little milk cartons in a bowl of water to keep the milk cold during the day, because there was no room for a fridge.

“Don’t worry, we have a kitchen and a bathroom now,” she says, laughing.

As a part of her work Luella searches the country looking for the best emerging artists she can find, while nurturing long standing relationships with many of Aotearoa’s leading makers.

She visits artist’s studios, watches them create, listens to their stories and immerses herself in their world. She uses her learnings to help her care for the artist’s work and to be able to pass on some beautiful tales to the future owner of the artwork.

“We see ourselves as the story tellers for the artists,” she says.

“We understand the value of connecting our wonderful clients with the stories attached to the artwork and the artist.”

She also turns her studio visits into a series of insightful blogs, that are peppered with photos from former Kina staff member and local photographer Katie O’Neill.

Visiting the artists and sharing their stories helps to create that feeling of Kina being a family. Some artists have even been with Kina right from day dot, all the way back in April 1999. And then there’s the customers that Luella can remember from her very first weeks in the shop 18 years ago.

“There are many special customers and artists and staff members that I have forged ever lasting relationships with along the way. The people I have met at Kina make the space an enjoyable space to be in each day and this is one of the reasons why I have stayed,” she says.

The next stage of Kina’s journey is about to start, with Luella taking a step back from the day-to-day running of the shop, and focusing more on the big picture.

“I have such a wonderful and capable team of talented women, and they are hungry to do more, and I trust them entirely.

“And I’ll have more time to do things like the studio visits and the blogs.”

The Kina women she speaks of are indeed talented, and each is a creative in their own right.

“Kina has grown to be such a multidimensional business it needs a wonderful team of women,” Luella says.

“Each of us has a role, and each is so important to the end goal.”